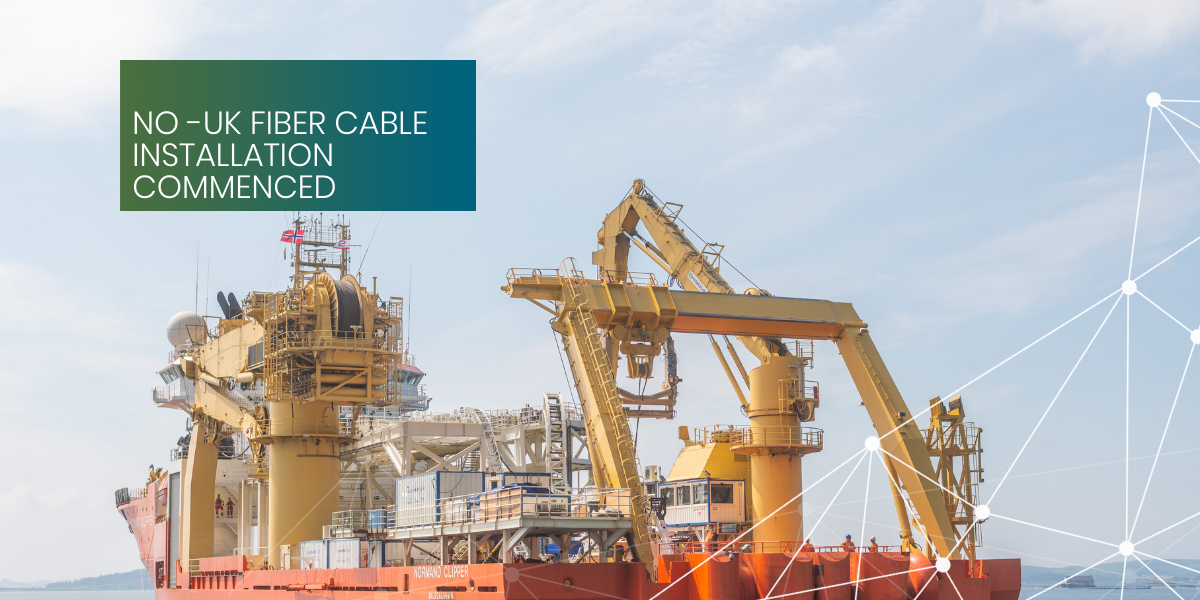 Installation of the 700-kilometer-long submarine NO-UK fiber cable started at Green Mountain’s data center today. This new cable route connects the west coast of Norway with Newcastle. Furthermore, it will significantly increase data capacity between Norway, the UK, and the rest of the world. They will complete the operation by the end of summer and put it in operation by Q4 2021.

Behind the NO-UK fiber cable project are the companies Green Mountain, Lyse, Haugaland Kraft, BKK, Hatteland Group and Ryfylke IKS. Together with the county mayor, these companies were present at Rennesøy to mark the event when the vessel Normand Clipper started the installation work. The work will continue throughout the summer and the cable will be operational this year.

Furthermore, NO-UK is part of a wider network of existing submarine and terrestrial (in-land) cables operated by Altibox Carrier.

– Firstly, it is a great achievement to have reached this key milestone. All parties engaged in this critical project have made a significant effort. Secondly, with the rapidly increasing demand for data worldwide, never has it been more pressing to develop our links with other countries. NO-UK will complement Altibox’s existing architecture. And therefore strengthen Norway’s connections globally. said Geir Ims, Chairman of NO-UK AS

– This NO-UK fiber cable project further strengthens Green Mountain’s position as the connectivity hub in the Southwestern part of Norway. We are now able to reach 54% of all businesses in Europe with sub 20 ms latency. As a result, several international connectivity providers have already signed agreements. They will be utilizing this new submarine cable as a new connectivity highway between Norway and the UK. With improved resilience and reduced latency, the Stavanger region now offers a realistic alternative to the data center cluster in London. said CEO of Green Mountain, Tor Kristian Gyland.

With the NO-UK fiber cable soon to be realized, Norway’s value proposition of renewable energy, low electricity prices and stable framework conditions is further strengthened on the connectivity side as well.

The investment in the 700-kilometer-long submarine fiber cable is carried out by a consortium consisting of companies Lyse, Green Mountain, Haugaland Kraft, BKK, Ryfylke IKS, and Hatteland Group. Moreover, with a transport capacity of up to 216 terabits per second, the subsea fiber cable will significantly increase the data capacity between Norway and abroad. The NO-UK cable is an open cable system providing a total of eight dark fibre pairs from Stavanger to Newcastle. Through Altibox Carrier the consortium can offer dark fibre or capacity backhaul routes to any major PoP in the Nordics or UK.

Green Mountain has created a data center CO2 calculator to identify how much you can save...

Less than 8 months after Green Mountain expanded its mountain hall facility at...

Data centers are the building blocks of the modern digital infrastructure. Nevertheless,...

How do you build a data center platform for scale and speed? An article by CSO, of Green...