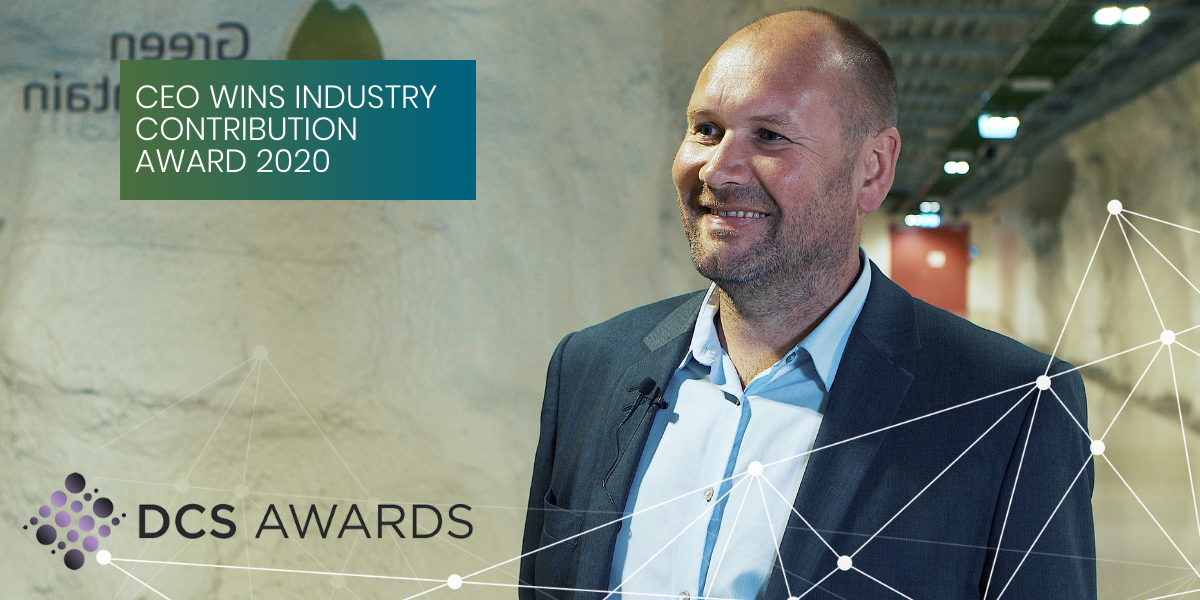 We are proud to announce that Green Mountain CEO, Tor Kristian Gyland, has been honored with the Data Centre Solutions’ “Data Centre Industry Contribution of the year” award 2020. This is an award recognizing an individual who has made a significant contribution to the data center industry in EMEA.  Gyland was nominated for his immense contribution in building and promoting Norway as a data center location.

“I am truly honored to win this Industry Contribution Award. Especially since the winners are chosen by voting.” says Gyland. The winners of the DCS awards are voted for in their thousands by the readers of Data Centre Solutions, Digitalisation World, members of the Data Centre Alliance as well as peers, clients, and other aspects of the supply chain. “It also shows that the industry is recognizing the great development that is happening in the Norwegian DC industry”, Gyland continues.  It is only in the recent years the industry has opened its eyes towards Norway as a data center location. From being “too far away, too complicated, too immature”, this region is now a rising star. Offering a value proposition of green energy, low power costs and stable framework conditions.

Gyland has been one of the leading figures in developing the DC industry in Norway.  Here is a brief overview of his efforts in promoting Norway as a DC location:

Gyland’s journey in the data center industry started in 2011, when he took the role as CTO of Green Mountain. This newly established company had an ambition of building a new industry in Norway, realizing that the country had all the prerequisites to become an attractive data center destination. At this point, there were hardly any colocation providers in Norway. Most of the enterprise data centers were hidden in office basements. Together with the first few employees of Green Mountain he crafted a strategy of building both the best and greenest data centers in Europe. Gyland was responsible for designing Green Mountain’s two first data centers, located in Stavanger and Rjukan. They have been TierIII certified by Uptime institute and have won numerous awards for innovative solutions and high-quality.

Gyland saw early on that building top-notch facilities were not enough to attract international customers. “In order to position Norway as an attractive data center destination we had to work together as a united industry. We also needed to work towards the authorities in Norway to create the best framework conditions possible. And make the industry competitive in an international market.” says Gyland.

Gyland was heavily involved in these efforts, working together with competitors, NGOs, and politicians to create a foundation for growth in the industry. All the work produced results and in 2018 the Norwegian government presented their data center strategy “Norway as a Data Center Nation”. This plan includes measures relating to tax reductions, facilitation of fiber optic cables, and less bureaucratic regulations. It has proven to be effective as the Norwegian industry has experienced a tremendous increase in establishments and interest from international clients like Microsoft and Google.

Advising newcomers in the industry

One of the major challenges in presenting the Norwegian value proposition abroad was the fact that the players in the industry were not equally mature. It has therefore been important for Green Mountain to facilitate the exchange of knowledge and experience between the companies. This has been done both informally and through the Invest in Norway organization. Bringing the whole industry up to par and having a common narrative to present has been a vital factor in succeeding. “As a more mature player, we have a responsibility of setting the industry standard. Making sure the whole industry works towards it.” says Gyland.

Improved connectivity is a critical factor in order to succeed. In Norway, there are now several new subsea fiber cables in the making or recently launched. Gyland, and Green Mountain, has been directly involved in one of these projects, the NO-UK cable. In addition to being one of the owners, the landing station of the cable connecting Norway and the UK will be at the DC1-Stavanger facility. This 700 km long cable with be part of the Euroconnect-1 fiber network. It connects Norway to important digital hubs such as London, Brussels, Amsterdam, and Hamburg. “We have always had a strong value proposition with our renewable and abundant hydropower, low power prices, safe business environment and beneficial framework conditions. Now we can truly add multiple state-of-the art international fiber connections to the list, which makes our offer even stronger.” says Gyland.

The growth accelerated in 2017

In 2017 Gyland became the new CEO of Green Mountain. From this point, both Green Mountain and the Norwegian industry started reaping the fruits of their labor. For Green Mountain, the contractual revenues have more than doubled every year since, and the growth continues. With the opening of our 3rd data center in the Oslo region this year, Green Mountain has a unique offering to the international market. “The strategy of industry collaboration and putting Norway first has proven effective. We have managed to attract multi-national enterprises to the country. We have positioned Norway as a rising star among Europe’s data center locations.” says Gyland.

Building a new industry also means developing a professional workforce. A workforce that is specialized and capable of solving the challenges in data center design and development. Gyland has been a proactive force in this regard as well. On one hand, he has made it Green Mountain’s strategy to build competence internally by taking in apprentices, and support the professional development of employees through further education and courses. On the other hand, he has contributed to the establishment of a higher professional study in data center infrastructure technology at the Tinius Olsen School in Norway. This new study is the first of its kind in Northern Europe. It provides a comprehensive understanding of how data centers are operated. This includes knowledge and skills in electrical, climate/energy/environment and safety, as well as computer knowledge. The graduates will be an important workforce to rely on as the industry grows.  Gyland has for the last 5 years held guest lectures at the University of Oslo. He has also spread the word at other conferences to create interest for the datacenter business.

The importance of site development

Professional site development has always been a topic close to Gyland’s heart. “If we want to attract international clients, we have to know their needs and facilitate sites that satisfy their requirements. It is not sufficient to brag about our availability of power and land, we have to make the choice easy for them, in respect to all the factors affection site selection.” For instance, Gyland has been involved in the establishment of “New Kaupang”, an organization showcasing sites in the western part of Norway and assisting international clients in gaining access to sites, stakeholders and resources. At Kalberg Valley, outside Stavanger, he is participating in the development of a new area. It has a potential to grow to 1.500 Acres, with a power capacity of 500 – 1000 MW. And connectivity to cater for the world’s biggest Cloud and Content providers.

“To become a truly attractive data center location, we have to show that Norway can host both hyperscalers and co-location clients with the same level of quality. I believe that our cooperative approach is the reason that an increasing number of companies choose Norway as their next data center destination.”, the winner of the Industry Contribution Award concludes.

Over the past 10 years the Data Centre Solutions Awards has firmly established itself as the DC industry’s premier annual celebration. End user projects, product innovation and individual excellencies have been recognized and celebrated in fun packed ceremonies. The award categories cover both the facilities and IT aspects of the data center. Recognizing the achievements of vendors, their business partners, their staff and their customers.

Another year is coming to an end. Thus, it is time for a summary of Green...

On December 16th, 2020, the Infrastructure Masons announced the IM100 Awards list. This...

What does it require to perform key maintenance on the unique fjord cooling solution at...

For Green Mountain Operation Technician, Erik Haugvaldstad, one certificate of...