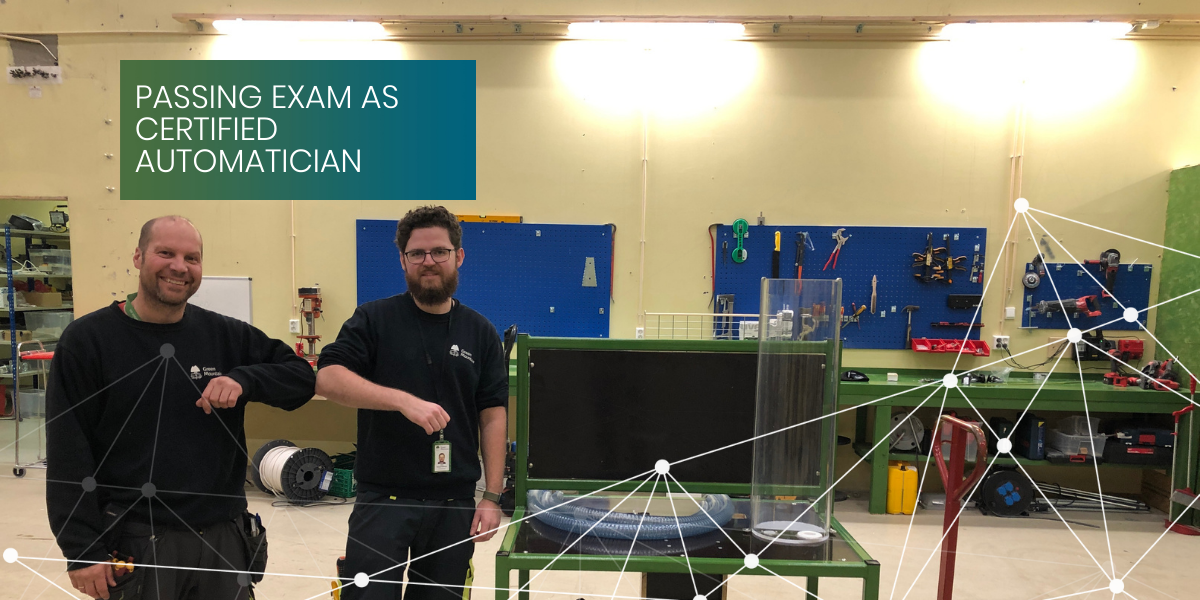 Passing his second certificate of apprenticeship as automatician

For Green Mountain Operation Technician, Erik Haugvaldstad, one certificate of apprenticeship was apparently not enough. Immediately after passing his exam in computer electronics and starting his regular employment, he embarked on yet another course of study. This time he wanted to become a Certified Automatician. On November 17th, he passed his exam.  Erik can now boast two certificates that come in very handy as a data center technician.

Erik started his journey with Green Mountain back in 2014. He then worked as a helper in the holidays, with various task. He enjoyed the work and subsequently became an apprentice in Computer Electronics 4, 5 years ago. After he completed his first apprenticeship he was hired as an Operation Technician at Green Mountain and was already by then a trusted member of the Operations Team. However, Erik had greater ambitions. He wanted to strengthen his competence with yet another certificate – this time as an automatician. His manager in Green Mountain, Jim-Aage Johansen, was nothing but supportive. Bjarne Sørbø, DC Design & Operation Specialist, became his supervisor and mentor in the following two and a half years learning period.

During this time, he has been both an apprentice and a regular employee. He has completed the theoretical work by internet studies and has received specific and relevant tasks in the data center to train his skills as an automatician. “It was a challenge, combining both my normal work and the study course. I spent a lot of evenings in front of my computer or doing extra apprentice tasks at the site. On the other hand, since I was an employee already, I had more confidence and experience compared to my first apprentice period. His supervisor, Bjarne Sørbø agrees: “Erik has been a very independent, mature and self-motivated candidate. It requires self-discipline to combine work and studies. I am impressed with his efforts.”

The final exam consisted of the following parts: preparation, execution, self-evaluation, and documentation. He performed the exam on a purpose-built skid, demonstrating his skills. Our own mechanic, Hågen Hanasand, designed and built the skid. Erik`s task was to create the automated control system for maintaining a selectable water lever. The assignment also included installation of the main parts, such as pump, valves, tubes, and PLC.

Furthermore, the examiners asked him numerous questions both about his project and the subject in general.  After two and a half hours, Erik could breathe a sigh of relief as he had passed the exam as an certified automatician. “I had no doubt he would succeed. He has been very dedicated from the start and shows a genuine curiosity of alle the disciplines needed to operate a data center.” Sørbø says. “To operate a data center efficiently we need an interdisciplinary team. Today, we have team members with very diverse backgrounds. From automation, electronics, telecom, mechanics, plumbing, computer electronics and more.  They are all needed to perform the various tasks in a data center.” Sørbø adds.

“I am proud to have achieved these two certificates as it strengthens my competence and understanding of DC operations. The world of data centers is constantly changing so I am sure I will add more skills or certificates to my resume in the future … I am still only 23 years old”.  Erik confidently concludes.

An automatician is an electrical professional who assembles, operates, and maintains automated systems. That is, systems for control, management and regulation of automated production processes and electromechanical systems, which work without or with little help from humans.

How do you build a data center platform for scale and speed? An article by CSO, of Green...

How to recruit for a data center? Irene Vikingstad was employed as Green Mountain’s...

Another year is coming to an end. Thus, it is time for a summary of Green...